I can’t teach anyone how to ride a horse (those things make my butt hurt). I’m not a handy man, so don’t look for advice from me. Don’t ask me how to make money. At this point, I want to apologize to all those affected by some of the dumbass decisions I’ve made in the past, present and future. To the guy whose Jughead hat I gave to an elephant in Central Park—I’m sorry.

The stories herein are true and recorded as faithfully as memory permits, or in some cases as faithfully as was related to me sometime after the fact. Regarding narrative wherein prosecution could be pursuant, it’s all fiction and lies. That was someone else.

These writings are excerpts from manuscripts which are either complete or in progress.

Street of Rogues (200,000 words [two parts], completed manuscript, unpublished) is autobiographical and covers my teen years in New York City and Europe (1968—1975)—up until the time of my first marriage. Those years were filled with addictions, travel and learning experiences. The book narrates what I found to help me overcome certain weaknesses of character.

“Wild-assed-cynical-seen-it-all-New-York-City-teen goes to bed stoned, wakes up in 1970’s Europe with a backpack and a willingness to recapture child-like awe in the world around him.”— Greg Crites, veinarmor.com

“Daddy, Why Can’t I Say ‘Ass?'” (complete, unpublished) is also autobiographical. This gist of Daddy… is how to survive a household with a teenage daughter and a menopausal wife. There’s a complicated step-mother issue in the mix as well as a struggle by the Father to find his writing voice.

P.I.S.S.E.D. (86,640 words, complete, unpublished) is fiction but two thirds of it is based on the non-fiction that was, at one time, my life. Here’s the blurb:

What do a young, disillusioned man, a baseball fan, and a terrorist-for-hire from Switzerland have in common?

Mick, who dislikes his job, isn’t sure about his wife, disdains work at any level and desperately wants a massage. Max, who has no job, loves his wife, loves baseball but not the players, and wonders what to do next with his life. And Holly Al-Gutentag from Switzerland, an equal rights anarchist, idealist, terrorist-for-hire, lightly armed and easily angered lesbian.

These three seemingly unrelated lives each have their unique challenges. Witness the slow boil to fruition, ultimately symbolized by Lady Liberty herself. Find out why they’re P.I.S.S.E.D (People In Stressful Situations Every Day)—and how three separate stories can have the same ending.

101 Songs You Shouldn’t Sing on TV (complete, probably unpublishable) is a song parody book with chapters of creative prose sprinkled in by contributors Jeni Decker (jenidecker.com or: closetspacemusings.blogspot.com) and the inimitable Kat Nove (katnovian.com). My friend Derrick contributed the “heady” parody: The Little Old Lady Who Sucked My Weiner. This is definitely R Rated for Language and Situations. Maybe even X in some places.

The Long-winded but Light-hearted Tale of Little Long-legged Lindsay’s Lesson (A Fable of the Utmost Importance) is a short story (13,000 words, unpublished) about a young girl who is lost in the jungle. She forms an alliance with Milly Tilly Dilly, a filly from Philly, to help find Lindsay’s parents in the town of Pura Vida-Vitaville. My bow to Jonathan Swift and Dr. Seuss, this is posted in its entirety. The sequel, Sleepy Sally and the Sun Crystal, is complete (21,000 words, unpublished).

Tropical Cancer is the most current (unfinished) manuscript. The story is ongoing because I’m living it now. It’s about moving to Costa Rica, a place of infinite beauty, grace, breathtaking jungle and wonderful people from all over the world—and some losers, too. During its growth, Angry Mountain Villas has exhibited signs of ADD, introversion, narcolepsy, amnesia, sociopathy, tendency to suicide, kinkiness, dependencies, halitosis and St. Vitus Dance. But when I wake up in the morning I’m glad to be alive. (Photos.)

The posts are in Ascending order (oldest to newest).

Note: Please be advised that some of the accompanying text has (gasp) “colorful” language. I protest the prevailing notion that some words are “bad” and submit that it is the mind of the beholder which makes them so. To me, offensive words are rape, murder, abuse, violence, war, torture, politician and the like.

Remember what George Carlin said: You can prick your finger, but you can’t finger your prick.

The illustrations are by Barry Geller (1934-2010), my father. Thanks, Pop. Many were published during The Golden Years of advertising art (1960s) in publications such as Playboy, Redbook, and The Herald Tribune. Some are paintings (acrylic on masonite or various paper substrates). To me they will always be “Pop” art. 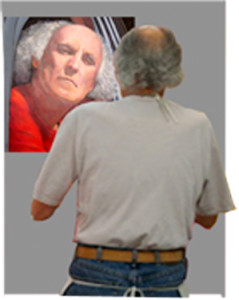 4 thoughts on “What To Read”