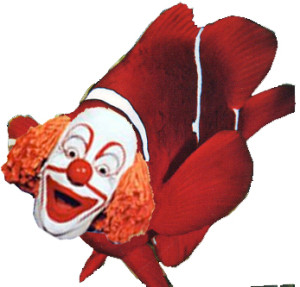 “Plant marigolds,” Greg R. Greg advised him. “They keep the gophers at bay.”

Mick mused on his friend and coworker.  What a stupid name.

Greg and his girlfriend Lorna had both changed their last name to Greg, so it appeared they were married. Since Lorna had two daughters in grade-school and Greg the-former-Sobel was an old hippie-type marry-phobe, they thought it was a good idea to trick the status quo. Mick thought it made the initial R stand out, and played the guessing game he and Greg R. Greg had going for the past two years as he tried to figure out what it stood for. He’d gone through the usual list long ago.

It was never any of those traditional names. Mick’s last guess was Raskolnikov; but nyet, wrong again.

“No,” Greg R. Greg was nominally amused at being referred to as the mad monk. “That’s what I’ve heard. They keep the gophers away.”

“Robespier-r-r-re…” Mick let it trail off, as if to entice Greg R. Greg to accept that as the definitive middle name and be done with this stupid, interminable guessing game.

Greg R. Greg stood hunched over the work table at Everett’s Press, which was semi-fondly referred to as ‘Everett’s Stress,’ scrunching his long, gray beard and staring at the chess board.

Stacks of printed material were witness as he touched his Knight, but didn’t move it. Greg-Greg, as he came to be called, was short, predominantly round, and bald except for the long hair that had long since slipped from his head into becoming a bushy, gray beard. Should he stand on the lawn in December, one could easily mistake him for a Christmas decoration. At the moment, he looked like an exact replica of himself, cast in wax and poised to, maybe, finally move.

“Go ahead,” said Mick, goading him from the other side of the table, while occasionally tending to the small press running the tiny jobs that floated through the quaint but poor Mom-Pop print shop in the not very big town of Sanity Cruise. He liked to use all the tactics he had at his disposal to win at chess, though he hardly ever succeeded, and often told Greg-Greg, “I wouldn’t do that if I were you.” It wasn’t that Mick was a poor player. He knew how to castle, he even knew the en passant protocol, and getting a pawn to the other side of the board in order to get his Queen back—which was a common and typically futile exercise in desperation. He could think a few moves ahead, but often misplaced the first two in the process of getting there.

One day that’s gonna pay off, he thought, hoping he was getting better with each game he lost.

Greg-Greg teased Mick, still holding his Knight. “I found another photo in the trash bin. It’s a good one.”

“Lemme see it! C’mon…” Mick pleaded to no avail. Greg-Greg always found the naked girl pictures from the photo developer’s trash next door and brought them home without showing them to Mick.

“Can’t. I brought it home. She was standing in a stream…” Naked, of course.

There were several apartments above Everett’s Press. Over the din of the press, Greg R. Greg and Mick rolled their eyes at the young couple upstairs yelling at each other. They did this regularly, but always managed to kiss and make up. Today the unintelligible clamour was accompanied by loud footsteps back and forth across the ceiling.

Everett emerged from the back room, where he set up the graphics for printing, glanced at the racket above and shook his head. Mick finished swishing some ink back and forth in the press, watching and waiting for Greg R. Greg to make his move—who was still poised to, maybe, do something in this lifetime before melting. Everett, noticing the chess game set up between the stacks of jobs, stopped to consider Greg-Greg’s stork-like pose over the board. In the clackety hubbub of the press and argumentative grunts from upstairs, the three hovered on the verge of Greg R. Greg’s non-decision. With each passing tick, Everett’s blood pressure raised up a notch, until finally…

“Would you put that damn board away and get to work!”

The paper stacks wobbled and Greg R. Greg removed his hand from his Knight, looking like he’d just been awakened from a stressful nap. “Huh? Oh… Yes sir!” He saluted and went back to his work area.

Mick checked his paper feed, ducking down behind the stack as Greg-Greg scurried away. Damn, now he’ll start over.

Everett made a quick turn and left, back to the sanctity of his relatively quiet studio, where only instrumentals were played on the radio. He thought songs with words were distracting.

When Mick stood up, he was near enough the pass-through window to the reception area to see a customer walk through the door. “Oh no…” he said aloud, and quickly moved out of sight.

Beth, the meek sales help, greeted the man cheerily. “Hi Erra! How are you today?”

Mick groaned, caught Greg R. Greg’s attention, and nodded in the direction of the front door. “It’s Error…” Greg-Greg hunkered over his work, chuckling like a gay dwarf. “If he needs more resumés I’ll shove them down his throat,” Mick told the back of Greg R. Greg’s bald head. He slowed the press down to hear better.

“I need ten more resumés,” said the man they called Error. Mick thought he should order ten-thousand, just to be sure.

“Envelopes too?” Beth asked, ever the consummate salesgirl. Mick could hear the smiley face in her voice and mocked it under his breath.

Shall I pre-moisten them for you with my tongue? Smiley face.

Normally a reasonable request, from Erra this meant they had to be perfect. They must look exactly as if he had typed them himself. The letter thickness had to match the original precisely, and there could be no stray ink spots anywhere—which was impossible with the paper plates and quick-printing process Everett’s Press used. Usually it took at least five plates, each exposed within a second of the preceeding one, in order to finesse the image to perfection. With each plate costing over a buck a piece, the few-buck chump-change for the perfect copies was always a time and money loser. Hence, the nickname.

Mick thought of his competition down the street. They had been in business since the turn of the century and still printed business cards one at a time on an old letterpress. They were traditional, and respected the profession’s long-standing brotherhood among printers. When Mick needed some advice, or to cut down some over-sized paper, he could always count on the family of Mission Printers down the street. The old man knew how to handle customers. When one lady complained about her flyers, he tossed the job in the trash and said, “Next.” The memory always brought a smile to Mick’s face.

Beth came around the partition waving the new original. “We need ten copies on Strathmore paper, can you do it while he waits?”

Mick wondered if this clown would ever get a fucking job. “There isn’t enough paper to get this guy a job. I’d rather just hire him,” he told her, snatching the original from her hand.

“He’s an engineer,” smiley-face said. “What’s he gonna do in a print shop?”

The stomping continued from above. The yelling got louder and all three looked up. There was a muted CRASH! and the three stooges had to wonder: what the fuck was that? Mick thought he heard a dripping, dribbling sound. Something caught his eye but made no sense.

He looked at Greg-Greg as if asking: ‘What the fuck?’ In precious few Everett’s Stress seconds, water started dripping from more places above. With the house dropped on them, both men quickly went for the plastic garbage bags to cover everything. Mick established split-second priorities as the streams grew thicker. Pull the plug, cover the press, then the paper and chessboard on the tables.

Greg R. Greg frantically laid out garbage bags as water cascaded in long sheets over all the tables, the press, and the two blue-collar workers. As new streams broke open, the men hustled garbage cans under the flow and threw more bags down. Error was idling in reception, leafing through an Architectural Digest, when Beth blew by and out the front door. In twenty seconds it was all over but for the remaining drips splattering intermittently on the plastic garbage bags in the new, tropical quiet.

“Holy fucking shit!” Mick looked up for more, feeling like the coach after a big win—except this was no electrolyte drink, or celebration.

“What the fuck is that smell?” Both men sniffed around, trying to identify the familiar odor.

Everett turned the corner and walked into the press area.

“What th—?” Everett wanted to know, looking at all the water dripping through the ceiling. His mouth was open but nothing came out.

“Don’t worry,” Mick told him. “I think we got everything covered in time.”

Everett sniffed the air, as if someone just farted. “What’s that smell?”
Just then, the kid from upstairs came running in—looking panicked and flustered. He stopped and looked around with the rest of them, then held his nose at the smell. All three men awaited his explanation with bated breath.

This should be good.

“Oh man, I’m sorry… We were… We…” The kid stammered himself into silence.

“What was it, dude?” Mick asked, showing resigned patience, “Spiked heels on the water bed?”

There was a pause as the smell became recognizeable. “Oh. Uh… that makes sense,” Mick said. “How big was the tank?”

It was twenty gallons.

“But I didn’t lose the fish! It’s amazing, but he lived!” The boy said cheerily. “I’m really sorry…” and he left.

“That’s nice.” Mick said, watching him go. He turned to Everett, “What kind of guy keeps one fish in twenty gallons of water?”

Everett didn’t have that answer. “Did we lose anything?”

“Nope. We got it all in time, I think. Nothing to worry about, Boss. You just go take a spin in that pink Cadillac of yours and we’ll get it all shipshape by the time you get back.”

Everett nodded, thinking that might be a good idea. “It’s teaberry,” he corrected Mick.

“Hey, you’re the artist. Whatever you say.”

Everett went out the back door to the parking lot, started up his teaberry Cadillac, and drove away.

“It appears…” Mick said, “that Everett has left the building. Time to take out the garbage!”

“No! It’s my turn!” Greg-Greg was firm, and headed for the back door in a trot.

“Hey,” Beth peeked through the pass-through window, “Can I get my resumés now?”

“Can’t you see we have a tropical disaster here, woman? Tell him to go away.”

Beth thought Mick was kidding. “Sure, and how do—”

“Far away! And tell him not to come back until it’s raining cats and…” Mick turned the corner toward the back door and the trash bin, hot on Greg-Greg’s heels.