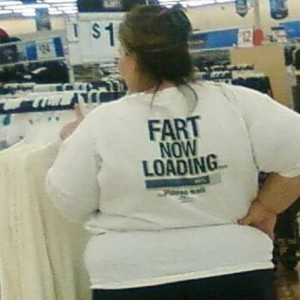 (Author’s Note: When my writing voice found me on 05/05/05, I discovered I could write about anything in which I had a sincere interest. All I had to do was sit backwards on the commode and an idea would surface (among other things) to write about. Brushing my teeth, showering and flossing all became tricks to let my mind do its work without the pressure of having a keyboard at my fingertips—waiting for me to type something epiphanous. Apparently, flatulence was one of those interests.)

I’m sitting backwards on the commode. I don’t have to take a shit, I’m waiting for an idea. If something doesn’t come up soon I may have to brush my teeth. Or worse, floss. I face the wall, as usual, with my legs straddling the seat cover and look at my towel.

You’re going to fart, says my inner voice, my inspiration.

I’ll assume you didn’t mean to ask Why do we fart? but rather, why is it that you always fart while you sit backwards on the toilet seat?

It’s true. Whenever I need an idea a fart precedes it. It’s usually not a tiny, cursory-type fart but a surprisingly loud one, too. Maybe it’s because of the seat cover being hard, I don’t know.

There’s good acoustics in here. Have you ever actually seen a fart?

I have to laugh at that. “Of course not, well not really anyhow. It’s almost by definition that you can’t see a fart. Like cleavage, it’s implied. On the other hand, if you light one up with a match I can tell you from experience it will explode. Depending on the nature of the specific fart, it could go off like a can of hairspray!”

That would be a ‘Category 5’ fart?

Then there’s supposed farts; ones that are disguised as farts but, when put to the test, are actually shit. Technically those are just shit—and, regrettably, a rather unfartunate experience. Basically, the only way to see flatulence is to cover it up with something; but then you only see the fart’s force, not the actual wind. I saw one travel down a guy’s leg once; he was also sitting on something hard. I don’t want to take any credibility away from the story by saying it was at the tail end of an acid trip when it happened because our trips always ended up in a farting match.

Are you sure that was because of the acid?

I wait. There it is, like clockwork. The rumblings start in my intestines (or whatever they are) and sure enough, it drops down to the launching pad. Once there, I can almost decide how it’s going to sound on the way out just by the way I arrange my butt. Oh yes, a real virtuoso am I.

Quick, go look at it in the mirror!

“Wha…!? You want me to go look at it? I can tell you right now I’m not going to go watch my fart come out in the mirror.”

Why not, aren’t you curious?

Well, now you are!

You’re curious because I mentioned it. C’mon, it’ll be a gas!

…unless you say something.

I jump off the toilet. “Damn, I can’t believe I’m doing this.”

I have my own rooting section. I run to the mirror and drop my pants, hoping now that I can hold it in for as long as it takes to get a good view of the thing as it’s delivered. I’ve had to look at my asshole before, naturally, but never with this in mind. Usually, well, nevermind…

Here she comes! We give it a gender. Get set!

“Okay, okay!” I get set, bending over and spreading my ass up to the mirror, hoping Babe doesn’t suddenly walk through the door. “This is a really bad idea.” I’m a grown man, I shouldn’t be holding my farts up to the mirror for inspection.

I have to move a little closer and flip on another light. I can now tell you for certain that No, the sun doesn’t shine down there. So I finally get my bunghole lit up and there it is, staring back at me as a mis-shapen, tiny hole surrounded by what can best be described as its own aureola. It looks almost prehistoric—like we should be evolving out of the need for an asshole altogether. It’s also got that crinkled look, which allows it to expand, I surmise. If you were to look at a photo enlargement of the thing, you may see it as an old roll of tan crepe paper that’s been stored in the sun too long. Briefly, I’m reminded of Crazy Bob and the shit he took off the Little League backstop that night in the pouring rain.

Shhh! Here it comes! (Fart protocol dictates you listen for it.)

At long last, Mission Control hit the button and sent it down the chute; or in this position, up the chute. I was poised, ready, and staring directly into my own asshole—waiting for it to emerge—to prove to my inner, creative voice that you can’t actually see a fart. Final stages complete, it was at the door and ready to break on through to the other side. I watched, actually curious now. When it came, my butt hole opened up just a little bit and actually pushed out, like an anemone discharges the bones of a fish, until it was in just the right position. Finally, at the moment of truth, it said: Pfoooot! and collapsed. The hole got smaller and went ‘at ease.’ At that point I was staring at my asshole for no reason and straightened up quickly. I hadn’t lost all my faculties.

We were both laughing while I moved away from the area around the mirror.

Your bunghole has an aureola, dude! Aha-ha-ha-ha-ha!

Now I’m inspired. “I should make a movie. A digital one I can e-mail to people I don’t like.” Then I tried to imagine what it would be like to set up the camera and wait for a fart: “And… action!”

The writing gig wasn’t working out like I had envisioned.