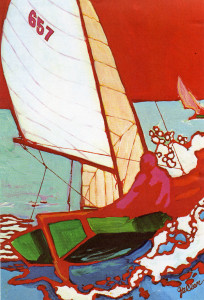 When Babe suggested we go deep sea fishing I should have given it more thought before agreeing. Such as: No. For one thing, I didn’t think about what time I’d have to get up in the morning for such a venture. For another, we don’t have enough freezer space to store $80 worth of fish—which is what we hoped for after paying the captain that amount to take us out. And there’s the fact that I don’t know how to fish, nor do I particularly like to handle them.

What the hell was I thinking? Oh, I remember… how nice it will be to drift on the ocean in the sunshine with my thermos of gin and tonic and catch a nice, fat tuna. Ahi…

Yeah, that’s it. Below is the condensed version of how the whole episode played out in my head:

My eyes are scratchy.

Wonder if it’s in bad taste to eat tuna sandwiches while fishing for tuna.

Grab the umbrella for shade.

Jesus, does he always drive this fast down the hill?

Hunger. “What did you bring to eat, Jim?”

I peel a banana and think: Ew?

We pick up Bob, Wes, Jeff, Lisa and Christian—more suckers hoodwinked into this folly at $40 bucks a head.

Drive half an hour to the river dock. Daytime finally shows up.

The crew is friendly, the dock nice, the boat small. I climb aboard and pull out the gin, wondering where the key to wind up the boat goes.

Sky is cloudy, but the tropics are warm.

Thought: ALGEBRAT should be a Scrabble-worthy word. (Don’t know how that got in there.)

I convince Bob that Babe and I should sit in the back, so we can smoke downwind. He buys it and moves up front. The bow, I guess it is. We face the rear. Aft, I reckon.

Here we go! Only a half hour to get to the ocean, I’m told.

Was that a raindrop?

Love how the jungle looks from the river. Flocks of different birds (some black, some white, all with a dash of fluorescent color here and there) fly beside us intermittently, coming off the  beautiful palms, bamboo, mango and other trees lining the river. Thick, lush, redolent jungle. I breathe deeply and choke a little on the exhaust from the engine.

It was definitely a raindrop, followed by more of them. Lots more. I put up the umbrella and Babe and I are cozy and dry. Everyone up front is getting wet fast. Babe and I light smokes, congratulate ourselves about how toasty dry we are and pass the gin between us. For the next half hour I marvel in silence at the abundance of life along the river’s edge.

Aha, the ocean! Only an hour more to go, I’m told by Steve, the very pleasant co-captain who sits by the outboard. Or two, he says, looking over us at the ocean ahead. I’m thankful the bench is padded.
At least it’s not hot. Clouds and rain are a good thing in the tropics. Sun and humidity make an uncomfortable twosome. Wow, that’s a lot of rain!

Now WAY up and WAY down on fifteen-foot swells. The wind whips the rain around such that only our bust remains dry under the umbrella. Correction: damp. Each pounding wave is accompanied by screaming from the people up front.

I chance a look around the umbrella and get a bucket of water in my face. Poor Lisa looks like she’s been in the pool with her clothes on. Her hair is stuck to her face.

Wes barfs over the side. Pura Vomit, baby.

More gin, please, except it pours down my face as I try to drink.

Is that… is that… motion sickness? The horizon is wishy-washy. The waves deep. There’s UP, there’s DOWN, UP and DOWN, up-up-UP, down-down. UP. Rock side to side.

Ugh. I close my eyes and concentrate on a vitreous remnant. It’s like a squiggly gyroscope on the inside of my eyelid and it stabilizes my queasiness.

Babe and I huddle for half an hour. We’re soaked except for our heads. “Good!” she says, I’m not sure why. The ocean is coal gray, spotted with whitecaps.

Remind self to thank Laurie for organizing this fiasco. When I see her next and she asks me how it went I’m going to throw a glass of water in her face and heave on her sandals. Then she’ll have an idea.

Everything is soaked through and through—even the ocean looks wetter than usual. Jim is freezing and Lisa has goose bumps. Bob pees while Christian sings a good-luck song for fishing. At least I imagine it’s such because I don’t understand a word. Nice touch, I think.

Steve is already casting off the back of the boat.

Grab a freakin’ fish and let’s get the hell out of here.

I try to eat a boiled egg but my mouth is dry. It takes forever since most of the gin to wash it down is flowing down my neck. Stupid thermos.

After much casting this way and that there’s a catch! Steve hands me the rod and I think I hear thunder. Oh great, a lightning rod in my groin area.

What is it? Boy or girl? Should I pass out cigars? It’s a 10 pound mackerel, sex unknown. Steve tears the hook out of its spine and throws the fish in the cooler on top of the oranges and juice. I feel guilty.

More of the same sin the fish.

We look around but still no fish. If there are fish they’re playing cards and laughing at us. I wish I was playing cards.

Another hour and a half of… ugh, I can’t even write it without getting nauseous.

Pay the man $400 and another $100 for gas. That’s a five hundred dollar fish to split between eight people—a fish I had to get up practically the day before to haul out of the ocean. A fish that nearly cost me my life, or possibly my groin area. A fish who made me wear half a thermos of gin!

If you ever ask me to go deep sea fishing don’t be surprised when I ask you to sit on a blowfish instead.